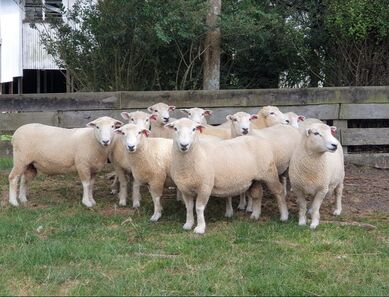 The Williams family became members of the ARDG in 1971 with a small flock of Romney's, this quickly grew as the farm developed.   Situated just north of Auckland the farm is a comfortable mix of hill country and rolling contours.   Jenny, Stuart and Joys daughter, along with her husband Adrian and two children Ashton and Shanae, joined the farm in 2009 and have managed the farm since 2014.  Stuart passed away in 2016 and Joy now lives in a rural residential care facility.   The farm now totals 480 hectares following the purchase of a neighbouring lease property.

Passionate to continue developing  the "Glenbrook" recorded flock, Adrian and Jenny are heavily committed to the rigorous  screening, recording and research required to produce the highest quality rams.  In 2020 the investment was made to DNA test every sheep in the recorded flock. The accuracy of data is very important to Adrian and Jenny and genomic testing is seen as the best way to provide this.

The "Glenbrook" flock has now been intensively screened for 53 years, with only the highest performing animals selected.   Only the best rams are interchanged between all ARDG members and other breeding partners. This distributes a broad band of genetic material from large numbers, these are indexed and ranked based on genetic testing and field analysis over a wide range of traits to be sure we are meeting the needs of commercial farmers.  In addition our contribution to the Central Progeny Test, the FE trail at Hunterville and the Multiplier Project at Whangara Farms ensures our genetics are tested in a variety of climates and challenges.
​
Along with the assistance and guidance of a geneticist, DNA testing with Zoetis and recording and analysis data with the help of Sheep Improvement Limited we have the very best information on which to select our sires and those for our customers.

Glenbrook Romneys run the recorded flock on pressure selection, this is based on increased fertility, improved body and wool weights with fleece excellence, facial eczema tolerance and worm resistance and resilience along with low dag scores, after all who wants to crutch?
A free lambing, open faced sheep with good mothering ability, a vigorous nature with high survival rates along with high ewe efficiency is a major feature. The flock is recorded for the above traits using the Sheep Improvement Limited recording system (SIL) and ranked using the National Genomic Evaluation. All stock is run under realistic stock rates on rolling to hill country contour.

Glenbrook's hero breeding trait is certainly FE tolerance, all rams are sired by New Zealand's most highly facial eczema tolerant rams. Facial eczema testing using Sporidesmin is carried out on a selection of the recorded ranked rams, with a range from each sire used.  The ARDG are leaders in FE tolerance, using the highest dose rates, our animals continue to out perform in this area. 50K DNA testing is also performed on all ram sires, this assists in ranking and selection processes and is used to create connectedness between ARDG flocks.  According to the ARDG geneticist this is something we do better than any other ram breeding group in New Zealand.

Worm resistance and worm resilience are vitally important to the commercial farmer, Glenbrook Romneys recognise this as a vital breeding goal.  All  ram lambs are put through worm resistance and worm resilience trials with  the guidance from Ag Research scientists, this is our 21st year of selecting rams based on this trait. A recent worm/drench trial from a local vet  helped to confirm the incredible advances the ARDG have made in this area, including no resistance to drench within the Glenbrook flock.  In 2020 Glenbrook Romneys became accredited with Worm FEC Gold accreditation.  Adrian and Jenny have also invested in FECPAC a worm FEC testing kit that can provide a FEC within an hour.  This is used to monitor frequency of drench, drench efficacy and can help identify paddocks with increased worm burden.

Improved genetic gains equating into real production gains for lamb growth, fertility, disease and parasite resistance and survival rates this combined with excellent meat eating quality ensures you are breeding the best genetics for your flock.

Adrian and Jenny look forward to helping you improve your flock and all enquires are welcomed. 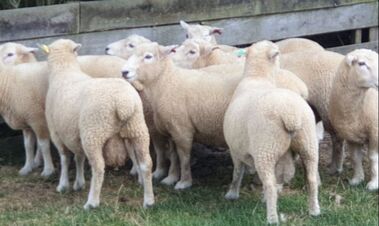