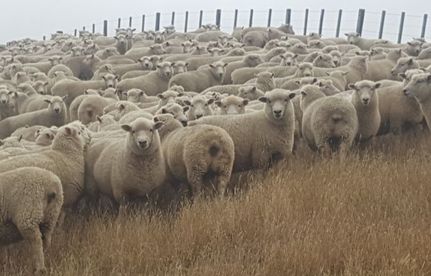 Alexander Farming Genetics is farming 570 ha in the central Waikato. The farm is run as an intensive breeding and finishing operation, wintering around 8000 su at over 14 su/ha.  In conjunction a 540 (460 hectare) hectare mainly breeding unit is run wintering around 5000 stock units at Dannevirke (Maunga Awa Station).  We are regularly achieving a lambing percentage in the range of 150% - 160%. One of our main objectives is ewe efficiency, with these results being achieved from high performing medium weight ewes. It is the ability of our sheep to perform under a high stocking rate, withstand a FE challenge and recover from tough environmental conditions that is of most importance to us.
We were one of the original members of the ARDG when it started in 1968, at which time we were farming in South Taranaki. In 1981, three years after our move to the Waikato we became aware of what Facial Eczema could do to an unprotected flock, losing hundreds of sheep and then having the subsequent losses in production that followed.
We now, with the ARDG have some of the most tolerant FE sheep in the country due to being involved when the original FE field trials were done in 1978 with scientists from Ag Research, Ruakura. Since 1986 we have been sporidesmin testing and are now testing at the highest rates (.67).  Our sheep now have the ability to come through some of the toughest FE years showing no effect at all. It is this trait and the fact that our sheep shift very well to other areas that now gives us a number of return buyers for our surplus 2th and MA ewes, plus increasing demand for our rams.
​
One of the first breeders to uptake Genomic Breeding Values (DNA) with the results in genetic gain being very impressive.  This is one area where there is real benefit and adds real value in hard to measure maternal traits.
We have also become leaders in the field of worm resilience and resistance research, with the help of Ag Research we have now made a large investment into this area. We feel that this is one of the more challenging problems that NZ sheep farming faces in the years ahead.