ARDG is in a great position to the technology on offer from Zoetis, focused on the use of DNA in the production and improvement of Livestock. DNA based technologies are currently being revolutionised.  Contemporary DNA discovery is moving away from finding only a few highly significant markers, to techniques that identify hundreds and even thousands of DNA markers at once.  This "fingerprint" of the animal can then be associated with desirable traits such as Weaning Weight, Number of Lambs Born, Faecal Egg Count and many more.

This new technology is colloquially called a "SNP Chip" and has been commercialised by Zoetis as Sheep50K. It has been in development for some years, but has hit the headlines in Sheep since the sequencing of the Ovine genome in 2008. Sheep50K makes use of all 50,000 marker results for each trait of every animal tested.
The results of the Sheep50K test will be delivered as an mBV or Molecular Breeding Value. In essence, the results should seem familiar and will look very similar to traditional eBV's (estimated breeding values from SIL, Sheep Improvement Limited). They are expressed in the units of a trait; e.g. kg's for Weaning Weight; and can be interpreted in much the same way. The key difference between the two is that while an eBV is an indication of "the value of an animal as a genetic parent". An mBV is a prediction of the animal's breeding value based on an animal's DNA-marker profile.

The answer: Reducing Risk. These three factors are maximised by ARDG to provide you with the best Ram for sale possible. DNA technology in the form of mBV's will play a significant part in this picture by reducing your risk in purchasing new genetics. How will it do this?
A good example of how and where an mBV might come into its own is in the production of a maternally based eBV for a potential sire. Currently the daughters of a sire must perform themselves before an accurate picture of a maternal eBV can be derived for a sire. With an mBV, an accurate prediction of how a sire itself may perform maternally can be attained at a very young age.

The information available when making your purchasing decision is substantial, but is not the full picture. Even with the addition of DNA technology information, the full picture is not completely attained, but it is another significant step in the right direction. mBVs have the ability to more fully describe the performance potential of an animal as a Sire, but from a much earlier age.

Performance recording organisations around the world are very conscious of how SNP Chips and resultant mBVs have the potential to aid breeders and commercial farmers in their endeavours. mBV's can combine with traditional eBV's to form gBVs and can be delivered in exactly the same way eBVs are currently delivered.

WATCH THIS SPACE!  Zoetis is excited to be providing Sheep50K to ARDG, the first commercially available test providing mBVs derived from a DNA marker panel with more than 50,000 DNA markers. Two things are for certain:
If you, the commercial ram buyer, want to learn more about how DNA technology could positively influence the breeding programme at ARDG and your future Sire, contact any of the breeders on our home page or visit the page about the farms.
Sharl Liebergreen
Regional Manager, Technical Services
Zoetis Animal Genetics


You can view the youtube clip below to  see us taking DNA samples.   Please read on below for further information about the ARDG's DNA research and sire selection processes.
ARDG has been actively involved in R&D for the Sheep Industry for many years. Recently, the organisation that has facilitated much of the ovine R&D in New Zealand has changed names and structure. Ovita has become Beef + Lamb NZ Genetics (BLG) and now incorporates Ovita, SIL (Sheep Improvement Ltd) and CPT (Central Progeny Test). It also has funding for Beef R&D which will be exciting for the beef industry. ARDG will continue to work with BLG and keep our ear to ground for anything that helps us produce rams that meet the needs of our ram buyers.
On reflection, ARDG has submitted a significant number of Rams for the R&D program:

For ARDG, this R&D commitment doesn’t come lightly. Each of these rams requires an individual performance recording effort for a number of traits as well as intensive recording of the progeny from these rams. All of this information is provided to BLG for them to be able to develop technologies and products for breeders like ARDG who can then turn out superior rams, year on year.
Our commitment to our ram buyers and our ability to lead the industry in important areas is perhaps best demonstrated in our Facial Eczema (FE) Tolerance breeding program. FE has been an issue in the North Island for many years and not having one eye on Facial Eczema tolerance has the potential to spell disaster in bad FE years. The chart below shows the trends for GGT21 eBV:
Remembering that more negative numbers are better, the trend for GGT21 eBV of ARDG highlights the strength of the ARDG FE program, compared to the GGT21 eBV trend for ‘All’ breeders in SILACE (including ARDG).

While ARDG has an emphasis on FE, we would be remiss if we didn’t constantly remind ourselves of the need to produce a good all round type of ram. There is no point in driving FE as hard as possible, while taking selection pressure off other traits such as Number of Lambs Born or Meat and Growth. Achieving this balance actually becomes increasingly difficult with time.

To meet this need, ARDG turns to technology. The FE phenotyping program Ram Guard allows us to progeny test a set of young rams that we believe are good for FE. The results confirm or deny our belief’s, but in the end we are able to move forward with new FE sires with confidence. In order to also select for traits other than FE however, we many need to sometimes compromise, ensuring that the new ram team as a whole has strengths across the board.

Therefore we are also using DNA testing or genomic technology to help us make informed decisions about the young rams we put forward for the Ram Guard FE phenotyping program. Sheep5K is a genomic tool delivered by Zoetis which allows us to quickly screen many of our young rams for 21 economically important traits, including FE. Sheep5K boosts the accuracy of breeding values of young animals using only an animal’s DNA profile. This accurate data early in an animal’s life will provide significant value in years to come meaning that we have a much better picture of an animal’s potential performance before we invest in progeny tests or other phenotyping programs.

The value of genomics is best demonstrated by its influence in the USA dairy industry. Genomics was implemented over there in 2009 and some of the data appearing now is incredibly promising. BLG have suggested that we should be able to get close to a doubling in the rate of genetic gain in the NZ sheep industry by implementing genomics. 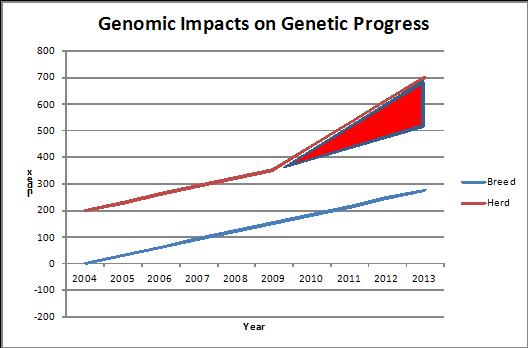 Where herds have tracked at a rate of genetic gain which is reflected by the industry in general, in some cases herds are seeing significantly more than this, beginning in 2009 when genomics was first introduced. The red triangle depicted above indicates the value created by genomics as a new rate of genetic gain is established. Much of this value is gained by identifying young heifers that have the potential to perform, vs. those that simply aren’t going to make it. The average age of the USA dairy herd has dropped significant since 2009, by identifying superior genetics, earlier in life.

ARDG is incredibly excited about the future of the NZ Sheep Industry. We will continue to invest in the flock appropriately, trusting of course that our ram buyers appreciate the effort going in and continue to support us.