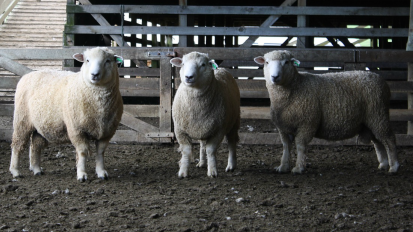 John and Jan Marchant together with  Greg and Angela Marchant farm at Maramarua, 40km from the towns of Pukekohe and Thames.

In 1975 the family settled on a Lands and Survey block of 305ha. Over the years they have purchased neighbouring properties and now farm 878ha of which 751ha is grassland.

Traditional farmers the Marchants run 2800 breeding ewes and 300 angus breeding cows.
​
The family became members of the ARDG in 1980. Sheep farming an  eczema prone area, that consistently records extremely high spore counts during the eczema months, would be very challenging if it wasn't for their involvement with the ARDG.  The Marchant's strongly believe
they would not be sheep farming in this district today without the outstanding eczema work that the ARDG has done over the years and proudly state 'We have a high performing eczema tolerant Romney flock'.

Aware of other issues facing farmers and as a group, worm resistance testing started in 2007, and are now Worm Fec approved.  The top ram hoggets' are 5K DNA tested and all sires used in the recorded flock are 50K tested.

Any farmer that contributes sheep losses to eczema should not hesitate to contact one  of the ARDG members and purchase eczema tolerant rams.